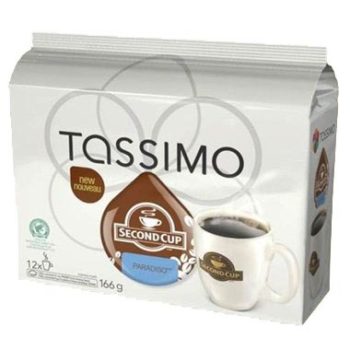 We continue our Second Cup review series today by checking out a milder version of their Paradiso coffee found in their Second Cup Paradiso T-Discs.

Once again, much like the dark roast version, these T-Discs are the size of the old Starbucks T-Discs or more common milk creamer T-Discs. Would this yield a stronger tasting medium roast or make things overly sour due to more amounts of acidity? Let’s find out.

Checkout our Tassimo pods guide to find the cheapest way to buy them.

Brewing these T-Discs resulted similar smoky notes blended with hints of dark chocolate and molasses, however unlike the dark roast version, the slight spiced raisin notes were replaced with very faint traces of cinnamon.

Flavor was as we had expected… the acidity turned things on the sour side and gave the coffee a citrusy taste. It dominated the cup and made it very difficult to detect any other notes present. Repeated tastings did eventually yield faint notes of molasses & smoke, but at that point, we were REALLY searching hard to find anything other than the citrus flavors.

Acidity was unsurprisingly on the stronger side due to the larger size of the T-Disc which had more coffee in it. We’re used to most medium roast T-Discs being in the smaller more conventionally-sized T-Discs. 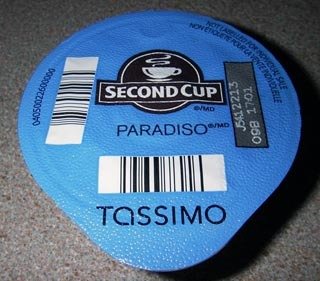 The extra amount of coffee just made the acidity the primary focus point of the coffee and harmed it rather than enhancing anything. There are ways to make citrusy coffees work well as a morning coffee, this unfortunately wasn’t one of them.

Body was medium to dark brown with tinges of gold on the edges but things really exploded when held in front of a light source. The added light revealed massively vibrant shades of red, orange and yellow with some sunburst effects going on in certain corners of the cup.

By far one of the liveliest displays of colors we’ve seen since the ghostly auras of our Celestial Seasonings Honey Lemon Ginseng Green Tea K-Cup review.

Mouth feel was somewhat smooth with a slight watery feel to it. Finish was sour overall with some faint notes of smoke in the aftertaste.

While we really enjoyed the Paradiso Dark T-Discs, we couldn’t help but wonder what went wrong with these lighter-roasted Paradiso T-Discs. We enjoy vibrant citrus notes everyone once in a while, but only when the process is done properly so that it enhances the coffee… not to the point where it overpowers it.

We wouldn’t exactly call this a lemon-flavored coffee, but a couple of tweaks here and there would probably achieve just that. It just goes to show it’s worth the time & cost to explore a coffee brand’s entire range/line-up since you never really know if you’ll be wanting a second cup or wishing you hadn’t taken the first one to begin with.

Second Cup Paradiso T-Discs work in all Tassimo Brewers (dual barcodes for home & professional models are on the discs) and are available in 12-packs for $10.99 CAD at various Canadian grocery store chains, at participating Second Cup coffee shops across Canada and online via either Amazon.