Coffee connoisseur’s love to dabble in the fine art of creating a variety of drinks out of espresso shots. Some prefer their espresso straight up, others with a bit of milk involved.

Many American’s have become accustomed to putting espresso to use in a variety of drinks that have become widely popular in the last few decades. This has led to a massive rise of locally owned and franchised espresso shops on about every corner of every major street in the country.

There are quite a few components that go into a shot of espresso this includes; the beans, the preparation, the machine, and the final ingredients added to make a unique drink. Let’s learn a little bit about each.

What’s the Origin of the Americano?

The Americano style of espresso coffee was created in Italy by American soldiers during World War II.  The soldiers were used to the strength of their drip coffee at home and found the Italian espresso too strong for their taste.  So to try to get something closer to what they were used to they simply added water to a standard espresso shot and the Americano was created.

Not an overly complicated drink and certainly very easy to make.  Best of all you can create the perfect Americano for your taste by varying the amount of water added to the espresso.  So experiment a little and you will find the perfect blend!

There’s a huge variety of coffee beans involved in making espresso. Any coffee bean can be used, however the roast of the bean is most often a medium or dark roast. The roasting process is where the beans are heated to an internal temperature of 400°F. The longer they’re kept at this temperature the darker the roast. Darker roasts have more body and produce a more robustly flavoured espresso.

Espresso requires a fine ground to allow the most extraction of flavour. Traditionally, espresso uses a blend of beans from various sources. However, it has become popular in America to use one type of bean sourced from only one farm. This allows flavours to express themselves that would otherwise be covered up.

The preparation of the espresso can affect the flavour nearly as much as the bean used. This process is fairly consistent across the world, but Americans have made one or two small.

The first step is to clean and wipe out the portafilter. The portafilter is the device that holds the grounds and has a screen that allows the water turned espresso to pass through. The portafilter should be filled with around 14 to 17 grams of grounds (makes 2 ounces of espresso).

American’s have been known to add nearly double that amount in order to increase the flavour intensity. After measuring the grounds, they must be tamped. Tamping is the process of applying 40-50 pounds of pressure with a tamper to compact the espresso grounds. This forces the water to extract even more flavour from the grounds.

What about a Long Black?

What is the difference between a Long Black and an Americano?  To be honest, absolutely nothing.  The Long Black is simply the name used for a Americano in Australia and New Zealand.  Everything about the drink is the same, including the debate of if the water or espresso should be poured first.

Most Australians and Kiwi’s like the espresso Crema so favour the water poured first, then the espresso single or double shot on top, so the crema is not diluted.

So there you have it, now you have unwittingly tried another type of coffee without even knowing it.

The espresso machine is the last essential piece in creating a delicious shot of espresso. There is a huge variety of models to meet any espresso needs.

Most home-brewers simply need the main espresso unit with a milk frothing wand and maybe a heated mug warmer. Commercial machines at shops typically automate the entire process from grinding the beans to disposing of the grounds.

The espresso machine should force the water through the portafilter at a pressure of 9psi and a temperature of 200°F. The espresso should be pulled for around 30 seconds producing a dark rich colour and a full crema (layer of foam atop the espresso).

For frothing the milk (whole milk preferably), the steam valve for the frothing wand should be opened while completely submerged in the milk. Keep wand submerged until the milk reaches 160°F and then begin raising and lowering the wand just under the surface of the milk to finish the frothing process. Any decent espresso machine should be able to produce a lovely shot of espresso paired with steamed frothy milk. 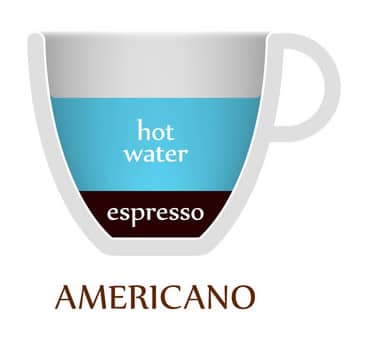 There are countless drinks to be made with espresso but Americans have a few favourites they like to stick to. Many are based off of traditional espresso concoctions, such as the macchiato which is traditionally espresso topped with a dollop of foamed milk.

The American versions usually uses equal parts foamed milk to espresso. The macchiato has a strong, intense flavour. Cappuccino is another traditional drink famous in America, it combines equal parts espresso and steamed milk topped with foamed milk. It has a smooth texture and robust flavour.

The mocha drink combines equal parts espresso, chocolate syrup and steamed milk. The mocha is known for its balance of chocolatey sweetness and robust espresso taste. These are all traditional drinks adapted to American tastes but there are some completely unique American drinks such as the café Americano and latte.

The café Americano is simply hot water added to espresso to give it a taste similar to coffee. The latte is made with three times as much milk as espresso, topped with foam. It is rich and creamy while full of flavour.

Making espresso takes a little know-how and some of the proper tools, but can result in some of the most delicious flavour any drink could achieve. America, as always, puts its own spin on things, but the end result is sure to be nothing but delicious.

I hope this article has inspired you to try americano.  If you find an espresso is too strong for your taste buds but do not particularly like milky coffee’s the americano might be your perfect cup in the morning.