Whether it’s for a morning energy boost, a break from shopping or just meting up with friends, coffee shops are fast becoming the UK’s favourite place to go.

But, while it sometimes seems like there is a Starbucks on every corner, often when you are in need of a caffeine boost you just can’t seem to find one. To help you out, use the map below to locate your nearest Starbucks.

If the map is not showing your location, you may need to turn on your phones, tablets or computers location services.  To be honest, this is unlikely to be an issue for most, as we all use location services to make our lives easier, but for those who have turned this off, follow the instructions below.

Starbucks Coffee Near Me

If you prefer physical addresses, I have broken up the drive thru locations by region, so you can easily find the address of a Costa Coffee drive thru near you.

So where did Starbucks come from? 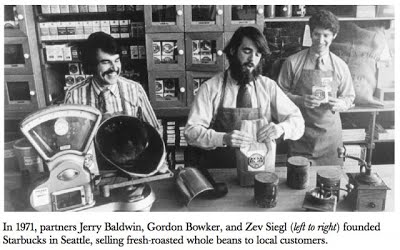 Howard Schultz joined the company in 1982 and proved to be quite the entrepreneur! They started selling their coffee to local restaurants and bars.

Schultz thought that Starbucks should sell not only coffee beans but also espresso and he suggested trying to copy the Italians and create a coffeehouse culture in Seattle. The owners weren’t interested, so Schultz left in 1985 to start his own coffee bar chain. Once he acquired Starbucks in 1987, he converted it into a coffee bar, and began rapidly expanding, turning the company into the huge force it is today.

In 1987 Starbucks acquired investors and became the Starbucks Corporation. By the end of the year it had 17 shops, including ones in Chicago and Vancouver, Canada. By the time the company went public in 1992, it had 165 shops, one of which was a licensed airport store in Seattle’s Sea-Tac International Airport.

But what about the name – Starbucks?

Well remember the company was started by a writer, an English teacher and a History teacher? Apparently Gordon Bowker was looking at an old mining map one day (as I am sure many of us do) and saw a town called Starbo. He liked the way the name sounded, even though it had nothing whatsoever to do with coffee. It reminded him of the first mate in Moby Dick and it turned out all three founders were big fans of Moby Dick.

They also considered ‘Cargo House’ and ‘Perquod’ (Captain Ahab’s whaling ship) as alternatives before agreeing on Starbuck. Perquod was the first choice for a while until they tried saying ‘Have a cup of Pequod’ and the they quickly decided on Starbuck instead. They thought it evoked the romance of the high seas and the seafaring tradition of the early coffee traders. They also added an “s” to make it sound better. 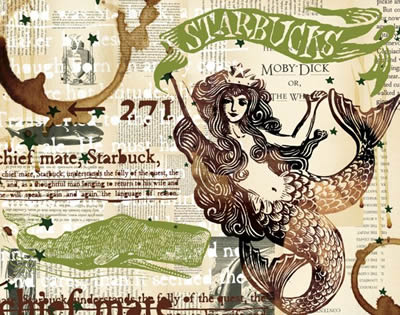 For those of you who have never got round to reading Moby Dick, Starbuck is the first mate of the Pequod, and his main function in the book is to be a contrast to Captain Ahab. He is reasonable and thoughtful, unlike Captain Ahab’s maniac obsession.

As a Quaker he provides a moral conscience and a respect for life, both human and the wales. At one point he considers killing Captain Ahab to stop him mortally endangering the crew but he cannot bring himself to take a life. Unfortunately this means that by the end of the book Starbuck is dead along with all the rest of the crew apart from one man.

What does any of this have to do with coffee?

Well in their early advertising material, Starbucks referred to “the coffee-loving first mate named Starbuck. However, the Herman Melville Society were not happy about this. They contacted the company, telling them that Starbuck does not drink coffee anywhere in Moby Dick. It’s true, at no point in the book does Starbuck have a cup of coffee!

So what about the logo? 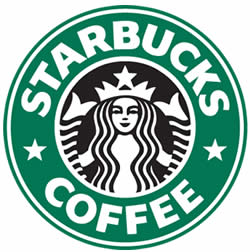 Remember Gordon Bowker? As well as being a founding member of Starbucks and a writer, he was also a partner a brand consulting firm. The other member of the firm was Terry Heckler.

Sticking with the maritime theme, Terry Heckler decided that he wanted something connected to Seattle’ maritime history for the Starbucks’ logo. He looked through old marine books until he came up with a logo based on an old sixteenth-century Norse woodcut of a two-tailed mermaid, or siren. It was thought that the mermaid would serve as a metaphor for the allure of caffeine, the sirens who drew sailors into the rocks.

The two-tailed, bare-breasted siren was supposed to be as seductive as coffee itself. However, once Heckler had seen the logo blown up on the side of a delivery truck, he gave the logo a redesign with hair falling over her breasts and the double tails in a less provocative pose.

So why isn’t the logo blue if they going with a nautical theme?

Originally the logo was brown and white and it was briefly black and white. It was Howard Schultz who introduced the green as he felt it represented growth, freshness, uniqueness and prosperity. At first the company’s name was around the outside of the logo but by 2011 the logo was streamlined to remove the lettering. By that time, despite how bizarre it might seem, a green mermaid had become synonymous with coffee!