As you have probably discovered, getting your coffee to taste just the way you like it is a complicated science.  It doesn’t help when some packets measure their coffee in scoops, some in cups, and others in tablespoons, a few in ounces but hardly any in grams.  It’s not just a problem when you are measuring your coffee but in lots of other recipes too.

To help you out, we have put together a handy explanation of how to convert from one to the other.  There’s a chart at the end of the article that lists the most commonly used measurements to make it all simpler.

It is pretty easy to measure liquids, in theory, as a liquid weighs about the same as they measure in ounces. 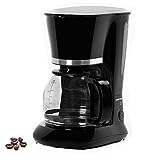 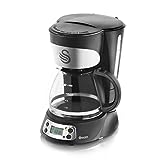 How many tablespoons in a cup?

So if it’s 1 cup to 16 tablespoons we can work out some other common measurements.

How many tablespoons in 1/2 cup?

How many tablespoons in 1/4 cup?

How many tablespoons in 1/3 cup?

Slightly harder is 1/3 of a cup.  For this you need a tablespoon and a teaspoon.  In case you’re not sure, a teaspoon is the smallest spoon, the one you would stir your tea with.

How many tablespoons in 2/3 cup?

If you are still confused, take a look at the below video for a simple explanation of how liquid conversations work. 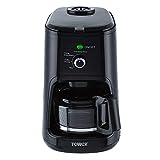 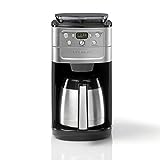 Cuisinart Grind and Brew Plus, Bean to Cup Filter...
(702)
Click to Check Price

As we have already said:

At least that is the simple version.

The main thing is to choose one size and stick with the same cup all the way through the recipe!

Measuring liquids are pretty straightforward but it is more complicated if you are measuring dry ingredients, such as coffee.  This is because cups are measuring volume not weight and that varies.

Also if your dry substance is an irregular shape it won’t completely fill the cup so the measurement will be different each time. It also depends if you pack the cup down and bother to level off the top with a knife.

Just to illustrate the confusion of trying to measure dry ingredients in cups:

If you use weighing scales then you get an accurate result every time and things are much easier.

You also find measurements is ounces, millilitres/milliliters, grams and cubic centimetres/centimeters. The easy bit is that millilitres, grams and cubic centimetres/centimeters are basically the same measurement. Millilitres/milliliters are the most precise way to measure liquids.  A fluid ounce is used for measuring liquid and is different to ounces which are used for dry ingredients.

They have the following abreviations:

Tablespoons are not the only form of measurement in cooking or grinding coffee, some parts of the world also use the dessert spoon, or desert spoon, to measure ingredients.

What Is a Dessert Spoon?

A dessert spoon is used in Canada, United Kingdom, New Zealand and Australia to, as the name suggests, eat dessert, cereal and other foods. It is also used in a kitchen to weigh solids and fluids.

A dessertspoon is bigger than a teaspoon but smaller than a tablespoon.

Holding 10mL of liquid a desert spoon sits between the tablespoon and a teaspoon in the spoon family. A teaspoon or tsp holds 5mL and a tablespoon or tbsp holds 15mL of liquid.

How Many Dessert Spoons in a Tablespoon?

When it comes to measuring coffee, most of us invest in a scoop.  I am very fond of mine as it is also the right size for tamping my espresso.  However, right now we are looking at measuring coffee for a filter machine.  A standard coffee scoop is 10 grams.

Remember how we said that spoons and cups are not very good for measuring dry ingredients?

What about coffee scoops?

Of course this is just a starting point.

A number of variables will change how much coffee you use.  How fine the coffee is ground makes a big difference. The main factor however is personal taste – some people prefer their coffee stronger than others.

Use these measurements as a starting point and then experiment adding a bit more or less until you have your perfect cup of coffee. Of course this means you will have to drink a lot of coffee but that is never a hardship!

Making the Perfect Cup of Coffee

Ask any barista and they will tell you that making the perfect cup of coffee is an art form.  Everything has to be just right, from the temperature of the water and the pressure of extraction, to the grind of the coffee beans and quantity used.  It might take a little practice to the get the rest of the process right, but at least it will be easier for you to now measure the perfect amount of ground coffee for your next espresso.