Over the past several years, we’ve been known to complain about the lack of new T-Disc flavors in retail stores, online or elsewhere and were just about ready to think that Kraft had all but given up on the Tassimo since Starbucks left and decided to partner with the competing Keurig machines instead. 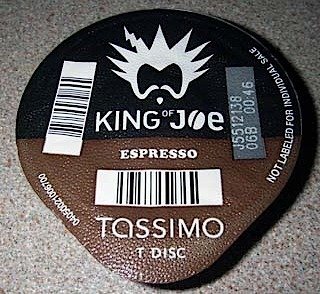 Ah, but then something strange happened… Kraft & Bosch decided enough was enough and started listening to fans.

New machines were being introduced, a major safety recall was handled somewhat efficiently (for the most part) and best of all, after what seemed like ages of inactivity, new flavors were being released.

A few at first, then more, and eventually the levee broke and we were flooded with a tidal wave of amazing new flavors to the point where we almost couldn’t keep track of all the new things that were coming out left and right. Could it be?

Have Kraft FINALLY listened to our complaints & concerns? It would seem so.

Now, sure… our #1 pet peeve about Kraft is STILL present and hasn’t been addressed: They STILL refuse to sell ALL their T-Disc flavors World-wide and have geoblocked them so that they can only be sold in their origin countries.

Some flavors have found their way this side of the pond, but not all. In Kraft’s defense however, they decided to do the next best thing… give us new flavors here at home vs. trying to import foreign flavors instead. Hey… a new flavor is a new flavor and after ages of seeing nothing develop, we’ll gladly take what we can get.

We kick things off today with a new brand we’ve never heard of before… King of Joe. We tried finding more info online but couldn’t dig up much & think it’s a new brand that Kraft created exclusively for the American Tassimo market. Today we’re reviewing the new King of Joe Espresso T-Discs. 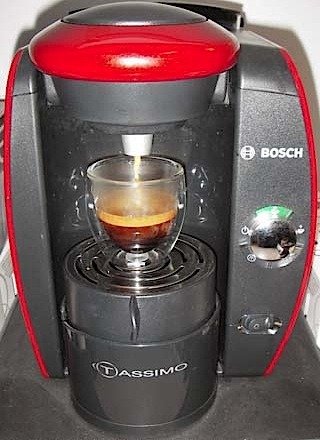 Brewing these T-Discs resulted in strong notes of molasses blended with nice smoky notes in the background. Closer inspection reveals faint notes of grains hiding underneath. A decent mix overall.

Flavor was satisfyingly strong with yet more mash-ups of flavors swirling about the cup. You first get the strong smoky notes mixed with strong oils from the heavily roasted coffee beans followed up by notes of dark chocolate, molasses and yes… even bread-like grain notes underneath.

Wow… could the namesake be true? Maybe we really are looking at the new king here.

Body was an opaque black in color with an amazingly thick beige/light brown crema layer on top. A light source had no effect as light couldn’t escape regardless.

Our jaws dropped when we saw the crema layer… seriously… when the heck was the last time you saw a crema layer THIS GOOD come out of a Tassimo? Color us gobsmacked… we were shocked to see the final results. Just… wow.

Acidity was on the strong side, which is to be expected for an espresso, but it wasn’t overbearing as it blended well with the smoky flavors and oily notes already present in the cup.

Despite strong acidity, mouth feel seemed smooth and (we can’t believe we’re saying this) almost on the syrupy side of things. Don’t worry, it’s not a thick syrup feeling like Mrs. Butterworth’s, but more of a thin feeling something like a light maple syrup.

Finish was slightly bitter with a smoky flavor and peppery aftertaste.

So, quite a little number we’ve got here right out of the gate, wouldn’t you say? We were pleasantly surprised by this new offering and really recommend that you at least give it a try if you’ve been looking for something strong in the espresso lineup. 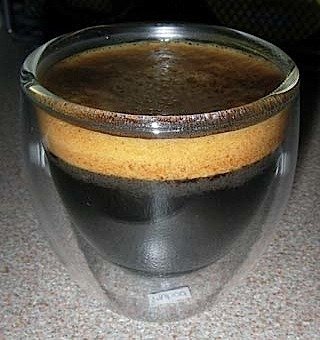 We’ve just barely scratched the surface of the new offerings that have just started hitting the market. There’s still 2 more King of Joe T-Discs, 2 more Corner Coffeehouse T-Discs and 2 Tea Bar Iced Tea T-Discs to review over the coming weeks, all of them brand new to the market. Plus, just as when Dunkin Donuts & Starbucks hit K-Cups here in USA, Canadians are experiencing a major milestone this October when their beloved Tim Horton’s coffee hits stores in T-Disc format.

The good news? You’ll also be able to order them in America as well. Plus they’ve still got the new Second Cup T-Discs coming out soon as well. We’ve been ragging on Kraft for many months but we think we owe them a BIG thank you for finally coming out with LOADS of new flavors not only in America but in Canada as well. All we can say is keep ’em coming guys, keep ’em coming!

King of Joe Espresso T-Discs will work in most Tassimo brewers and are available in 16-packs for $10.99 USD at Amazon, checkout our guide which show you how to get them at the cheapest prices.