Our journey through Joe’s kingdom continues today with the King of Joe Dark Roast T-Discs. One thing we forgot to point out in previous reviews was the work that went into designing the logos on each T-Disc. The subtle use of a coffee bean for the letter o in Joe, the different silhouette head/face shapes for each flavor, etc. All little touches that make us like the brand even more, so hats off to the designers/artists who worked on that. 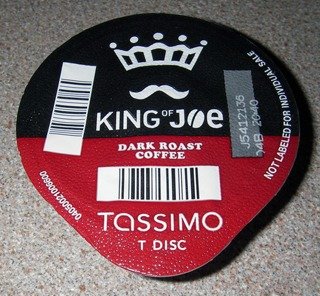 Brewing these T-Discs resulted in notes of molasses with faint tinges of hickory hiding underneath along with very faint oily notes as well.

Flavor was again dominated with notes of molasses & hickory but we also detected very faint bread/grain notes similar to their espresso T-Discs.

It’s interesting to see the genesis of a flavor note just starting to emerge here and the longer the beans are roasted, the more the note develops since we know for sure it’s more pronounced in the espresso T-Discs.

Body was a medium brown which was on the darker side (we’re resisting the urge to make a Star Wars pun here) with sunburst shades of orange, red & yellow that came through when held in front of a light source.

Acidity was surprisingly balanced overall and wasn’t strong enough to cause any sour or bitter notes but wasn’t weak enough to turn things watery either. It was just poised in the middle and kept things in check throughout the cup. Mouth feel was smooth with slight oily notes present.

Finish was clean with very faint dark chocolate notes followed by hints of smoke in the aftertaste. 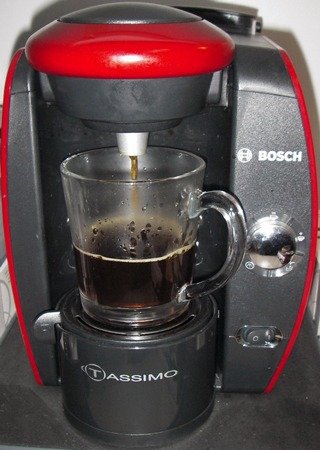 So, that concludes our King of Joe review series. We were totally floored by their espresso, thought their cappuccino could have been a bit stronger (but was still pretty good overall).

Now we get to their dark roast which also could have been a bit stronger but to be honest, after getting our taste buds fired into orbit by such mind poppers as Coffee People’s Jet Fuel K-Cups and the original Starbucks T-Discs, we’re glad to see a lighter-flavored dark roast hit the market.

It makes for a nice change of pace and a stepping stone for those who are just getting into trying dark roasts. Giv’er a try if you’re interested, you might actually enjoy this one.

We would also like to thank Coffee Cow for supplying us with samples for the purpose of this review.

King of Joe Dark Roast T-Discs will work in most Tassimo brewers and are available in 16-packs for $10.99 USD at Amazon.