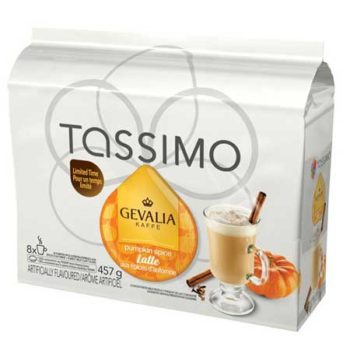 We realize we’re a bit late to the party with this review, but what the heck… as we always say: better late than never, right?

Today we check out one of our favorite new Tassimo flavors this past Fall 2013, Gevalia Pumpkin Spice Latte T-Discs.

As any Starbucks fan knows, there’s 3 letters that get them excited each October… PSL. Traditionally served between October 1st & Thanksgiving (the American version, for our readers up North), PSL or Pumpkin Spice Latte is a fan favorite which has been growing in popularity & demand each year.

We knew we’d definitely see it crop up at Starbucks locations, but we were shocked when we got a Tassimo newsletter that had it featured as their next new flavor. So just how would this T-Disc version stack up to the real deal you’d get at a Starbucks? After all, Kraft did have a rather messy split with Starbucks back in the day when they ceased making Starbucks T-Discs, so we were curious to see the results.

Billed as a blend of cinnamon, nutmeg & clove spices which are normally present in pumpkin pie, brewing these T-Discs resulted in an aroma that was certainly very PSL-like in nature as we could detect all 3 spices in abundance. As a matter of fact, it reminded us A LOT of the Starbucks version which is a pretty remarkable feat considering you’re using a single espresso T-Disc & not a blend of pre-made syrups & flavorings. So far, so good! 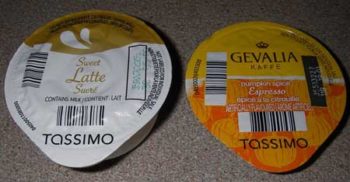 Flavor was simply shocking and had us standing still upon first sip. Short of slightly stronger spice flavor and some stronger smoky notes from a typical Starbucks espresso, this Gevalia PSL was a DEAD RINGER for the Starbucks version! No, we did not make a typo or temporarily go insane, you’re reading that correctly! Just simply… wow.

Seriously, this is as close as you’re going to get to a Starbucks PSL on a single serve coffee machine at home. Just like the real deal, you get the spice notes up front with individual tastes of cinnamon, nutmeg & cloves swirling about followed by the sweet, almost caramelly (is that even a word?) notes of the sweet latte creamer and a slight tinge of pumpkin flavor in the back end. Beyond outstanding and simply delicious.

Now, we’ll admit that we did get some faint hints of sucralose in the background from the creamer, so those who are more sensitive to artificial sweetener tastes will likely find that off-putting, but most people will probably be ok with this. 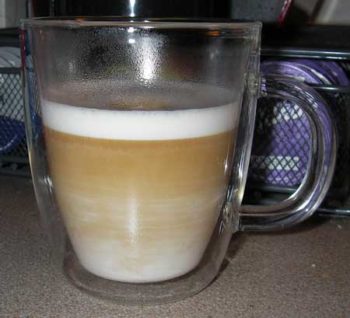 Acidity was toned down considerably with the addition of the creamer and seemed decently balanced enough to fit your usual latte profile while the spices in the espresso were more than enough to keep things lively. Body was nicely layered with typical shades of light to medium beige in the middle with a nice marbling effect of beige/white creamer on the bottom and a light layer of froth on top.

Mouth feel was silky smooth with a light creamy texture while finish was a bit dry with some lingering sweet notes at the end with more pumpkin spice notes in the aftertaste.

Well, as the saying goes, all good things come to those who wait and wow… did we EVER get a whopping serving ofgood things in this particular new T-Disc flavor! We invited a few friends over for sampling during Thanksgiving and were delighted by the perplexed looks on their faces as each one tried a sip then stopped for a few seconds as they tried to figure out whether or not they were drinking a Starbucks PSL.

One by one, the questions started pouring in: Wait… is this from Starbucks?, When did you find time to go grab some Starbucks this evening?, Ok, seriously, where’d you put the Starbucks cups?

Yes, we realize taste is highly subjective and everyone can taste things differently, but when you’ve got 3 people ALL asking you whether or not they were drinking PSLs from Starbucks, it’s a pretty strong sign that our original impressions weren’t that far off. Some may find this taste nothing like the real deal, but we had a room full of people that would say otherwise. 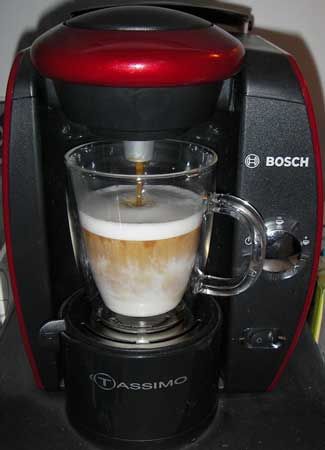 We’ve been riding Kraft pretty hard lately and we’re glad to see they haven’t given up the fight to introduce new flavors to the T-Disc line-up. Anyone who thinks the Tassimo is dead needs to give some of these new flavors a try.

This is by far, our #1 favorite T-Disc of all time on the Tassimo system and our only regret is that it’s a seasonal item which (from what we could see) quickly disappears off store shelves by the last week of November, so we’d recommend grabbing a pack if you happen to find one at a store near you since they can’t be ordered online from Tassimo Direct or too many other online sites at the time of this review.

We would like to point out that Kraft mercifully decided to make this a combined launch and released this flavor BOTH in USA & Canada at the same time this year. MAJOR thumbs up to Kraft for that move as we think preventing our Canadian friends from enjoying this flavor would have been nothing short of a war crime punishable by drinking an entire pack of Wal-Mart’s Our Finest Canadian Blend T-Discs in one sitting.

If this new PSL flavor is just a sign of things to come, then color us a shade of excited hyper kid who’s had one too many a pixie stick since we seriously love what Kraft is doing. In the words of Simpsons’ Comic Book Man: Best… T-Discs… EVER! As things stand, we think Kraft just won the PSL battle in the single serve universe and Starbucks will have their work cut out for them if they ever try produce a PSL for their Verismo system.

Gevalia Pumpkin Spice Latte T-Discs work in all Tassimo brewers (dual barcodes for home & professional models are on the discs) and are available seasonally in 8-packs (8 espresso + 8 milk creamer) for roughly $11.99 USD at various grocery store chains, at participating stores and online via Amazon. These T-Discs are also available seasonally in Canada for roughly $11.99 CAD at various grocery stores, and you will find them cheapest online via Amazon.