Canada recently experienced something it hadn’t seen for quite a while in the retail scene… a deluge of new T-Disc flavors for the Tassimo system. Today we take a look at the 1st of 2 new flavors that were introduced, namely the Tetley Orange Pekoe Tea T-Discs. 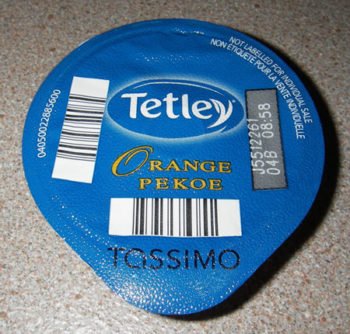 Tetley got its start as a tea merchant business founded in Yorkshire, England back in 1837 by brothers Joseph & Edward Tetley. They later relocated to London and by 1953, the company became the first to sell their tea in tea-bag format in the UK.

Fast forward to present day and Tetley is now owned by Tata Global Beverages of India, the 2nd largest tea-producing company world-wide. This has ensured that Tetley has become a household name in many countries.

Most recognizable for their circular tea-bag shape, the company decided to partner with Kraft to bring us Tetley Tea T-Discs in Canada and have gone so far as to claim that Tetley is Canada’s #1 tea.

Intriguingly enough, Tetley are also scheduled to release Tetley tea K-Cups for the competing Keurig K-Cup system later in 2013. We find it interesting why they decided to kick things off with Tassimo first given the need for barcode lids, specialized filters, special plastic molding, etc. which are associated with a T-Disc vs. K-Cups which contains simple paper filters, conventional foil lids & simple vacuum-formed plastic instead.

The Tassimo system only sees 2 flavors, the first of which is being reviewed here. It will be interesting to see if further flavors get released for their K-Cup lineup.

This tea brand is a staple in Canadian homes and has been a family favorite among many generations over the decades (although some families would claim the competing Red Rose brand is more popular). Let’s just look at it this way… in Canada, Tetley is to tea as what Tim Hortons is to coffee. We think you get the overall picture.

Brewing these T-Discs resulted in rich black tea aromas filling the room in what can only be described as a classic black tea aroma. Sharp notes were present and prickled the nose on first scent which indicated a decently strong cup of tea was awaiting us. Unlike other black teas, there’s just something bolder about Tetley which makes it a signature aroma which is instantly recognizable to those who’ve had it before.

Flavor indeed yielded a stronger than average black tea taste which seemed a bit more on the bolder side than some of the more delicate English Breakfast teas we’ve seen before in competing K-Cup format (again, will be interesting to see how closely the Tetley K-Cups compare to these T-Discs). Much like the aroma, Tetley’s black teas have always been bolder than other brands and set things apart to create an unmistakable signature taste. The only hints of bitterness came near the end when the tea’s natural tannins kicked in at the end of each sip. 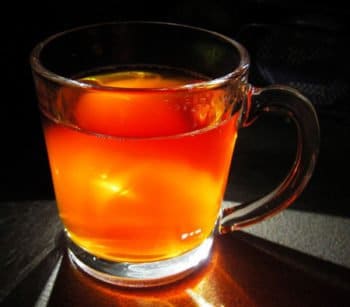 Acidity was fairly well-balanced as the bitter notes from the tannins played well with the bolder tastes of the main black tea flavor. The final result was lively and anything but dull. Body was an orange-tinged brown which exploded into vibrant & bright waves of orange & yellow when held in front of a light source. It was almost as if we had a cup of sunshine staring back at us (and the award for corniest line in a review goes to…)

Mouth feel seemed smooth but since teas are usually a lot lighter in nature than coffees, we weren’t surprised to see a near-watery consistency. This would have been horrible for a coffee, but for a tea, it’s perfectly acceptable and didn’t detract from the overall experience in any way. Aftertaste was dry and yielded more black tea notes from the main flavor.

While our parents would likely take exception with this review (they grew-up on Red Rose and never cared much for Tetley), we can’t find too much fault with these T-Discs. They’re just a nice, solid, classic cup of traditional black tea with a bolder than average kick. We’re sure our Canadian readers will be pleased by this review as tea has been quickly gaining more popularity that side of the border than in America, so that’s probably why we haven’t seen these T-Discs released here yet.

Tetley Orange Pekoe Tea T-Discs work in all Tassimo brewers (dual barcodes for home & professional models are on the discs) and are available in 14-packs for $6.99 CAD at various Canadian grocery store chains, however, be sure to checkout our Looking for Cheap Tassimo Pods guide to find out how to get them for the best price.

We would also like to note that we purchased a package of these T-Discs on our own for the purpose of this review.