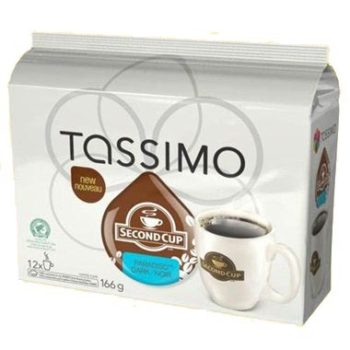 Second Cup may not be as well-known in America as Starbucks or Dunkin Donuts, but in Canada, they’re much like Timothy’s & Van Houtte as they’ve created a Canada-wide franchise chain of coffee shops & cafés which spans from coast to coast and are one of Tim Horton’s & Starbucks’ primary competitors.

The company has had a rather storied past complete with its fair share of controversy. Founded in Ontario in 1975, the company quickly expanded to 150 locations by 1988.

It’s changed hands many times over the years and experienced some tough times, most notably in 2001 when a member of the FLQ (Front du libération du Québec), a far left-wing Marxist-Leninist Québécois paramilitary group, attempted to firebomb 3 Second Cup shops in Montreal simply due to the fact that the company had chosen to retain its English-only logo on its shops despite them being located in a primarily French-speaking city.

As a controversial result of the attacks & the media coverage that resulted, the company changed the logos of its Quebec shops to Les cafés Second Cup. Thankfully, the company has since recovered from the public fear which was generated by the incident and now boast over 360 locations across Canada. Canadians can also now enjoy Second Cup coffee right at home with the recent introduction of Second Cup T-Discs for the Tassimo system.

We decided to kick off our Second Cup review series today by checking out the Second Cup Paradiso Dark T-Discs. Although you can’t tell from our photos, these T-Discs are actually the same size as the old Starbucks T-Discs or (if you never had a chance to check those out), they’re also the same size as a milk creamer T-Disc. This should result in a full-flavored coffee with a considerable punch if previous experiences are anything to go by. 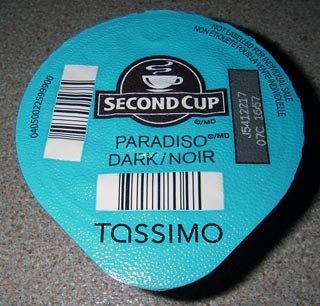 Brewing these T-Discs resulted in strong smoky notes mixed with hints of dark chocolate, molasses & spiced raisin. A rather odd mix, but hey… it works. Flavor was strong & oily at first then it yielded to notes of bittersweet chocolate with mild hints of molasses and dark cocoa underneath.

There was also a hint of spicy notes hiding underneath as well but the main notes here were the oils which seemed much more present than what we’re used to seeing in a T-Disc. We could detect every subtle char note from the dark roast process and even started to detect faint earthy notes near the end which we would have missed otherwise.

Acidity was surprisingly on the milder side of things and nowhere near as strong as what we had expected. This is likely what resulted in our ability to detect the subtleties of the oils in the flavor. There was enough pop to keep things from going dull, so we weren’t disappointed in the least.

After getting rather lackluster photo results lately, we changed our light source to HID LED and wow, what a difference. Body was very dark brown in color with explosively bright shades of bright red when held in front of the new light source. There were even sunburst effects in one of the corners.

Mouth feel was smooth with a thicker consistency than usual in what can only be described as light syrup, but don’t get us wrong… despite thinking that would be a downfall, it’s not. We’d prefer coffee with a bit of substance any day of the week vs. coffee which is too watered-down. Finish was a bit oily in taste with hints of bittersweet chocolate throughout. Faint smoky notes revealed themselves in the aftertaste.

Checkout our guide to find the cheapest prices. 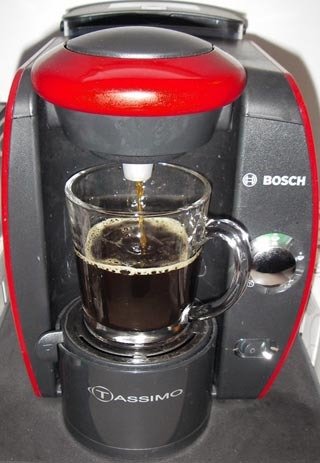 Most Canadians are well aware that the T-Disc retail scene a few years ago was dismal at best with only a very small handful of flavors available on store shelves.

The sheer number of flavors and brands over the past 5 years has virtually exploded overnight and now consumers have a rather decent amount of flavor choices out there.

It would seem Kraft finally woke up and realized it should give their fans what they wanted… major brand names, exclusive to the Tassimo system.

While Keurig may have Starbucks, Dunkins, Van Houtte & Timothy’s products, we think Kraft have done a remarkable job in Canada this year by securing the country’s main 2 coffee chains with Second Cup & Tim Horton’s products for the Tassimo.

With McDonalds Canada now selling their McCafé coffee in whole bean format at select restaurants, could a McCafé series of T-Discs be far behind?

Time will tell, we guess. As for these Second Cup T-Discs? They’re just further proof that big name coffee shops can achieve just as good of a result on home brewers as they can in their own shops & cafés. With this particular T-Disc flavor, we think the company really has found a slice of paradise which definitely warrants having a second cup.

Second Cup Paradiso Dark T-Discs work in all Tassimo Brewers (dual barcodes for home & professional models are on the discs) and are available in 12-packs for $10.99 CAD at various Canadian grocery store chains, at participating Second Cup coffee shops across Canada and online via amazon.