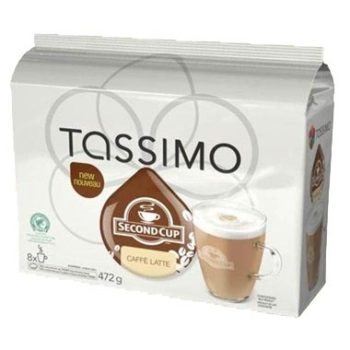 While we’ve got nothing against sprucing-up labeling, we do however take issue with Kraft using the same color scheme as its European milk creamer T-Discs.

Most people might misinterpret these T-Discs as being the same ones that are used overseas and that’s simply not the case. As we’ve said time and time again, the milk formula used in Europe far exceeds the one used in North America.

Instead of an overly buttery taste, things seem more akin to regular creamer for the most part. We think if Kraft bothered trying to make these labels look like their European counterparts, then they should have gone whole hog and just started importing the European T-Discs instead. We say get rid of the buttery-flavored milk creamers altogether. While we can put up with the taste, we’d rather have the European version any day. Well, enough ranting… let’s get on with the review, shall we? 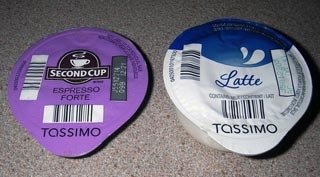 As we worked our way through the cup we got more buttery notes from the creamer much akin to buttermilk. Why Kraft thinks North Americans love buttermilk is beyond us and we can most assuredly confirm that the lattes you’d get at a Second Cup coffee shop do NOT use buttermilk for the creamer!

Acidity was toned down considerably with the addition of the creamer and seemed decently balanced enough to fit your usual latte profile, although things could have been a bit livelier. Body was nicely layered with typical shades of light to medium beige in the middle with white creamer on the bottom and a light layer of froth on top.

Mouth feel was silky smooth with a light creamy texture while finish was a bit dry with buttery notes throughout. Very faint smoky notes from the espresso revealed themselves in the aftertaste. 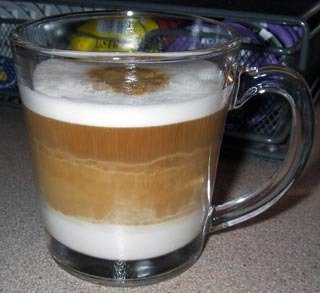 So, in case there’s still any shadow of a doubt left behind, it’s pretty clear we don’t really give a hoot about the North American milk creamer T-Discs and have always found it beyond bizarre as to why Kraft thought it’d be a good idea to butter-up the taste in this manner. Seriously… what the heck happened back in the day?

Did a bunch of taste/flavor profilers go to a nearby caffe and specifically ask to have buttermilk used as a creamer? Did the barista somehow get the milk pitchers mixed up or did someone at the table just say: Hey, you know what would be awesome? Making our creamer taste like we dropped a stick of butter in the cup!

Kraft have been using the same creamer this side of the pond since the first Braun Tassimo machine was introduced in 2004. We think it’s about time they change things up a bit or at least make an effort at using the same formula that’s being used in Europe. 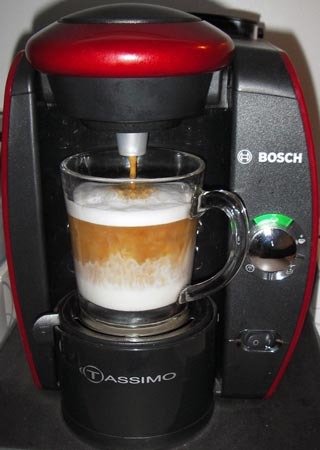 All that aside, the espresso used here is quite good and seems to be almost on-par with other similar espresso T-Discs from our favorite brands like Carte Noire or Jacobs. So if we take that into account, these T-Discs are at least worth a try on that merit alone.

As for Second Cup? We’d love to see what employees would have to say in a blind taste test comparison with one of their own lattes from their shops. Now THAT would be an episode of reality TV we’d actually tune in to see.

Second Cup Caffe Latte T-Discs work in all Tassimo Brewers (dual barcodes for home & professional models are on the discs) and are available in 8-packs (8 espresso + 8 milk creamer) for $12.99 CAD at various Canadian grocery store chains, at participating Second Cup coffee shops across Canada and online via amazon. These T-Discs are not currently available in USA.