In the UK today we spend a larger proportion of our disposable income on coffee than at any time in history. The recent explosion in high street coffee shop franchises such as Costa and Starbucks has triggered a huge demand for freshly brewed coffee in homes and offices across the country. 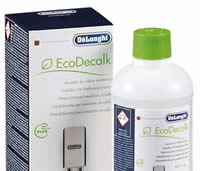 There are literally hundreds of different coffee makers on the market, some that are cheap but complicated to use and others that are expensive but can offer a more convenient quick fix through the use of pre-filled capsules.

Whatever you chose you are going to have spend time descaling your Nespresso coffee maker and, depending on your part of the country removing limescale deposits from your Tassimo machine that make that 30th cup taste nothing like the first one.

Where did coffee come from?

So, why the fascination with coffee?  Well, A little known fact… Coffee has been around for over eleven centuries and is currently the most consumed beverage in the world. Over 400 billion cups are consumed every year.

The first historical reference to coffee is made in the year 850 in Persia, yet more legendary version of the discovery of coffee go back much further in time. However, it seems most likely that the true history of coffee began in the late 6th century AD in the Caffa region of Ethiopia. Here, legends have claimed, a goat herder noticed a strange disquiet in his flock after they had eaten the berries and leaves of an odd unidentified plant. Monks from a nearby monastery heard of this phenomenon, and after various trials discovered that by roasting, grinding and infusing in water the seeds of this plant, a unique beverage could be acquired, the beverage helped to keep them awake through long hours of prayer.

It is most likely that because of this characteristic, that word and use of this drink spread amongst monasteries and was taken to Yemen. The use of coffee then spread as far as the holy cities of Mecca and Medina.  The word was further spread by the great number of pilgrims from all over the world who visited these cities, tasted coffee for the first time and took it back to their own countries.

The Turks pronounced it ‘qahve’ which not surprisingly became caffe, which then became café in European languages. The Dutch were the ones responsible for bringing the coffee plant to many other countries around the world.  It first arrived in Holland on a boat from Yemen in 1616 before being exported globally.

The first London coffeehouse was opened in the 17th century. These coffeehouses soon became known as ‘Penny Universities’, it was remarked that you could get an education for very little money while enjoying a coffee, just by paying attention to the great minds whom shared their voice and opinion in these shops. Coffeehouses now began to open all over the world. In 1686, the first Paris coffee house opened called ‘Le Procope’, and is still open today.

As you can see from the list, Scandinavians drink an awful lot of coffee, perhaps some of the biggest consumers globally, and I cannot see that changing anytime soon. This will only likely grow as more of the regions younger people take to coffee, encouraged by the spread of Costa Coffee and Starbucks coffee shops. Coffee has therefore been rejuvenated as a far more modern drink than tea of any of its hot beverage counterparts such as hot chocolate. Of course, if we were to look at sheer volume of coffee consumption, America and Brazil would top this list, but when it comes to per capita consumption, the Scandinavians are going to take some beating!