A quick foreword before we begin.  Whilst we’ve been sticking to the new “Quickview” format lately for most of our reviews, there were so many things in this lineup that we opted to write a bit of a misnomer, a long quickview, a MEGA Review if you will. Rest assured we’ll be returning to the Quickview format in the coming weeks. Without further delay, let’s move on to the review below. 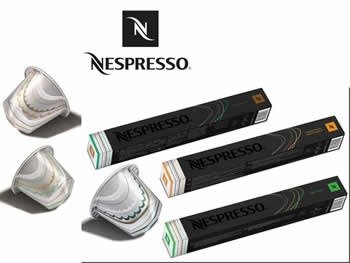 As the holidays are quickly approaching, we decided to check out what has become a yearly tradition… Nespresso’s Variations flavored espressos. Each November, the company creates a theme and derives flavors based on it.

While the themes seem mostly to revolve around desserts, nuts, candied items or natural flavors (cherry, vanilla bean, etc) there has only been one instance since Nespresso started introducing flavored espressos where they decided to add the flavors to their permanent lineup instead of making them limited editions only available for a few months (Ciocatino, Caramelito & Vanilio were the winners).

There have been contests where fans could vote for which 3 flavors they wanted out of 5 candidates, worldwide contests where the winning flavor from each country was made only available in that country (a rather annoying option given the fact that Nespresso is one of the only coffee companies that doesn’t normally geoblock its flavors & makes them available worldwide for the most part). Overall, the company is at the forefront of innovation when it comes to gourmet flavored espressos and while there have been repeat flavors from time to time, you’re usually guaranteed to get something new & unique each year.

The theme is Austrian desserts and features flavors commonly found in Austria around the holidays. We have Linzer Torte (redcurrant tart), Sachertorte (chocolate glazed cake with a thin layer of apricot jam) & Apfelstrudel (apple cinnamon puff pastry). All 3 flavors have the Livanto Grand Cru as their base (intensity level 6). The capsules also have fun artwork which represent elements or colors of the namesake flavors. Let’s check them out, shall we?

Strong notes of ripe red berries up front create an inviting aroma. You get a strong hit of redcurrant flavor throughout each sip followed by some of the Livanto’s cereal notes. A touch of cream would likely help blend the berry & cereal flavors together to recreate the namesake dessert. Very well executed overall.

The aroma in this one is very subtle. You get some mild hints of apricot and a faint hint of chocolate in the background but it’s nowhere as pronounced as the Linzer Torte’s berry notes. Again, upon first sip, we didn’t notice the flavors and were only getting the taste of the Livanto itself. It was only after we allowed the espresso to roll on our tongue that the flavors started revealing themselves.

We got warm notes of apricot and very faint notes of chocolate underneath. We’d definitely recommend a touch of cream to help push the flavors forward. This one ended up being our favorite flavor of the 3 the more we tasted it.

Mild aromas of cinnamon during brewing with almost imperceptible hints of apple in the background. Flavors were again muted at first sip and only appeared after rolling theespresso on our tongue. Warming notes of cinnamon with subtle apple flavors would definitely be enhanced by a touch of cream.

Overall, we really enjoyed this look at European holiday desserts from overseas & hope Nespresso introduce more holiday flavors in the coming years from other countries as well. It would be fun to see holiday flavors from places like the UK, South America, China, Japan, Australia or New Zealand. Can you imagine a sticky toffee pudding capsule from the UK? Our only regret is that they didn’t make a new holiday-themed TV commercial starring George Clooney & Danny DeVito for these new flavors.

FINAL VERDICT: Worth it!

Nespresso is known for making amazing promotional websites with detailed videos & background animations for their Variations flavors and this year is no exception. You can check out the 2016 OriginalLine Variations website here. 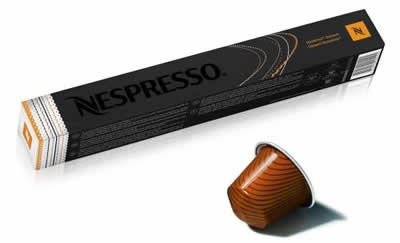 Ah, but the review doesn’t end there. You see, Nespresso pulled a surprising trick out their sleeve (pun intended) and decided, for the first time ever, to create 3 additional Variations flavors for the VertuoLine system! That’s right, the VertuoLine FINALLY has its own Variations flavors! Keeping with the dessert theme, the company decided to head across the pond to North America and create dessert flavors which are more commonly found here during the holidays. 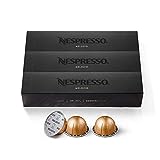 We get self-explanatory flavors of Pumpkin Spice Cake, Banana Bread & Gingerbread. All 3 flavors have the Half Caffeinato coffee as their base (intensity level 5). Let’s have a look at each flavor & see what this new lineup of flavored coffees has to offer.

After a few minutes of brewing, strong aromas of cloves & cardamom with hints of cinnamon fill the room & there’s no doubt this is a pumpkin spice coffee. The super-thick crema layer really adds to the overall cake experience as it gives you the impression of biting through a soft, airy/foamy piece of cake.

The pumpkin spices are definitely present upon first sip as you notice strong notes of cloves, cardamom & cinnamon throughout which is on par with any pumpkin spice coffee from Dunkins or Green Mountain.

Although the texture and taste seems a bit more pronounced & richer than what you’d get from either of those competitors. You also get an underlying sweetness from the pumpkin flavor. The addition of milk or creamer would mute the spices somewhat & should help push forward some of the sweeter pumpkin notes. An outstanding first attempt at a traditional pumpkin spice coffee from Nespresso.

This one turned out to be our favorite of the 3 flavors & think it would make for a killer PSL (sorry Starbucks!)

The only banana-flavored coffees we’ve seen before were both bananas foster versions. Nespresso decided to take a crack at it and opted to go with banana bread instead. This was a clever move as rather than getting an overpoweringly sweet mess of flavors, you are left with one simple flavor instead. You get a delicate aroma of bananas during brewing but it’s almost imperceptible without searching for it. It becomes more prevalent if you swirl the coffee in the cup and take a nose of it immediately afterwards.

The thick crema lends a bread-like texture (our mind must be playing tricks on us… we could almost swear this coffee’s crema has a denser bubble structure than the previous airy crema from the Pumpkin Spice Cake capsule) while you get what seems like an artificial banana extract flavor up front upon first sip.

It’s not off-putting or anything, it’s just artificial-tasting. Adding some milk or creamer would likely balance the flavor out more evenly and help lend to the sweeter characteristics within. This one will likely be an acquired taste for most people.

Nespresso has a penchant for all things gingerbread in their Variations it would seem since almost every few years, there’s a gingerbread or gingerbread-derivative flavor thrown in the mix. We’ve seen it be hit or miss with their espressos, so we were interested to see how it would fair as a full coffee.

Right off the bat, aromas were unmistakably filled with notes of strong ginger throughout much like you’d get from gingerbread cookies (odd why the words cake & bread were added to the previous flavors, yet the word cookie was omitted from this flavor despite the promotional site showing gingerbread cookies next to the capsule).

Again, flavor was much the same with strong hits of ginger pushing forward and then subduing to a warming note near the end of each sip. The addition of milk or creamer should tame the spicy notes and create something more akin to the namesake’s cookie format (ginger with a hint of spicy sweetness).

Overall, not too bad for a first effort. We’re glad that Nespresso have shown some love towards the VertuoLine system by releasing unique Variations flavors for it this year & we hope that this isn’t just a one-off experiment. We would love to see 3 new Variations flavors added each year for the VertuoLine in order to keep things fresh & exciting.

We’re sure those who decided to move away from the OriginalLine when the VertuoLine was released are pleased to see that they can now join in on the Variations fun & as for us, we’re glad to finally be getting flavored coffees for the machine as well. Plus did we mention the exquisite artwork on the capsules? Damn, we’d almost rather admire the artwork instead of actually using them. Hats off to the design team on this one.

FINAL VERDICT: Worth it!

In case you’re wondering, Nespresso have created a promotional site for the VertuoLine Variations as well. You can check it out here.