We’ve been working our way through Nespresso’s VertuoLine capsule line-up for the past several weeks and while we tried to find meaning behind the capsule names, we just kept thinking in the back of our minds that they were named after would-be Italian X-Men characters.

From the strongest espresso in the line-up (Diavolitto) to the strongest coffee in the line-up (Stormio), the names seem to invoke a sense of darkness & intrigue. Whatever the inspiration for the naming may be, we decided to forge ahead with today’s review of Nespresso’s VertuoLine Stormio Capsules.

Brewing these capsules resulted in strong smoky & earthy aromas throughout. Adding creamer helped bring out some of the hidden cereal notes which were lurking underneath. Ringing in at an 8 out of 11 on ye olde Nespresso intensity scale and containing a blend of Guatemalan & Nicaraguan beans, flavor was also on the stronger side with more smoky notes upfront followed by mild oily tinges and subtle notes of dark chocolate & molasses underneath. 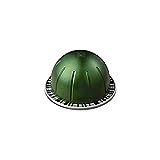 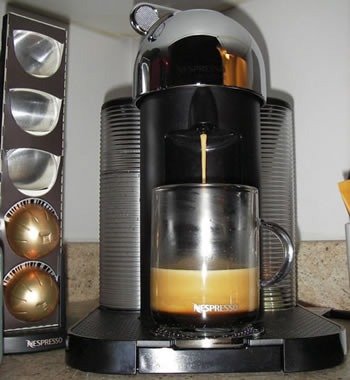 Adding creamer retained much of the smoky notes and much like the aroma, also brought forth some of the underlying cereal notes underneath.

Acidity is surprisingly well balanced overall as it wasn’t overpowering but was still noticeable enough to keep things vibrant throughout. The addition of creamer subdued everything considerably and while it didn’t render things totally flat, it could have still done with a bit more presence. Body was overly dark like a traditional dark roast and yielded a wine-like deep crimson red color when held to a light source, although the most noticeable thing was the super-thick golden crema layer on top which was bordering on 2” at times during brewing.

This is by far the thickest crema of any VertuoLine capsule we’ve seen yet. The addition of creamer yielded traditional beige and light brown colors you’d normally associate with a latte. 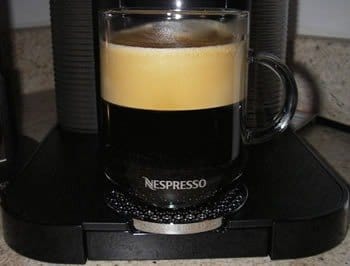 Mouth feel seemed smooth and had only a slight oily feel while adding creamer obviously added a silkier creamy texture to the final results. Finish was slightly sweet with more smoky notes which blended with dark chocolate flavors in the aftertaste. The addition of creamer gave things a slight cereal note in the aftertaste instead.

While it’s no secret that we like dark roast & extra bold coffees, we always enjoy it even further when a company tries to create a new way of enjoying it. Producing an insanely thick almost 2” crema layer on top of a dark roast coffee is nothing short of amazing and once you mix in some heavy coffee cream, it turns a mundane cup of coffee into an at-home premium coffee-house experience.

The addition of cream is sort of a double-edged sword however, as not only did it enhance the experience in certain ways, it also detracted in other ways. For example, the acidity took a substantial hit and while the flavor was obviously the thing which changed the most, we were hoping the dark chocolate notes would have followed-through but they were wiped-out by the creamer instead. That’s the only reason why this coffee scores higher when taken black. 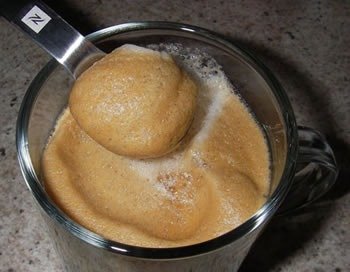 Nespresso noted they were trying to change the way North Americans think about coffee and to be honest, we’d have to say they’re starting to sway us. Out of all the coffee machines we’ve tried over the years from Bunn pod machines, to all the various Keurig & Tassimo incarnations to the Dolce Gusto and even Nespresso’s own OriginalLine series, we’d have to say that coffee produced on the VertuoLine is quickly becoming our favorite.

We just can’t get over having a super-thick crema on top of everything no matter what blend/flavor we pick. If only some of the latte drinks from the other machines could produce as thick a froth/crema on their drinks, we’d never set foot in a Starbucks or specialty coffee-house again (the OriginalLine Lattissima machines come really close).

If you’re still on the fence about investing in a VertuoLine system, we’d strongly recommend visiting a nearby retailer or Nespresso Boutique in order to get a demo/sample beverage in order to experience things for yourself. It’s definitely worth a try if nothing else and we’ve still got our fingers (and toes) crossed that we might see VertuoLine Variations capsules appear later this year.

Nespresso VertuoLine Stormio Capsules are available in sleeves of 10 in USA & Canada exclusively via Nespresso.com & Nespresso.ca (minimum of 5 sleeves, any flavor, required per online order). You can also buy individual sleeves of these capsules in-person at any Nespresso Boutique location across North America.