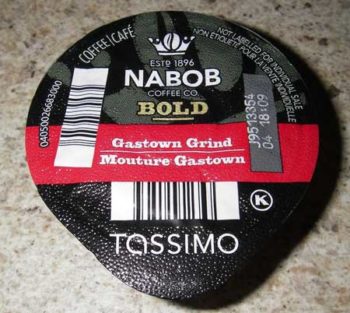 While some folks would argue that Tassimo machines seem to be more popular north of the border in Canada, that wasn’t always the case. For the longest time, the T-Disc brands/flavors on shelves up there was a pathetic smattering at best.

It appears Kraft has tried to even things out over the past few years, but they’ve unfortunately done so by removing most of the European T-Disc flavors from both sites and geoblocking them within their own respective countries instead while opting to let a few cross the pond only when they feel like doing so.

Fans complained and while Kraft decided they’d keep enforcing their geoblocking policies, they did push out a compromise which (while not ideal) seemed acceptable: release new flavors within each country.

USA got the King of Joe & Corner Coffeehouse series while Canada saw an expansion in the licensed T-Discs from national coffee chains such as Tim Hortons & Second Cup. The most recent new addition in Canada? Nabob’s Bold series of coffees. The new line-up is aimed to compete against Starbucks K-Cups and lure fans of the old Starbucks T-Discs back to the Tassimo brewer. Two of the strongest Bold series flavors have been made available in T-Disc format and today we check out the first: Nabob Bold Gastown Grind T-Discs. 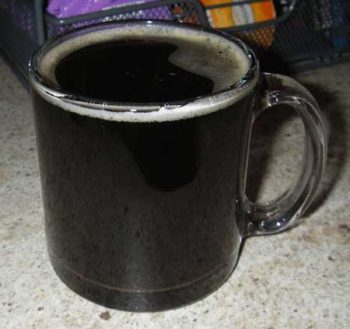 Nabob is one of the most popular Canadian coffee brands on the market next to Tim Hortons & Folgers and they’ve been offering whole bean & ground coffee in grocery stores for ages. Nabob got its start in the Gastown neighborhood of Vancouver BC and hence the namesake for these T-Discs.

Deemed a National Historic Site in Canada, we couldn’t help but wonder if this coffee could live up to such a prestigious & historic legacy. Let’s find out, shall we?

Brewing these T-Discs resulted in strong, rich oily aromas of smoky hickory blended with some faint grain & cereal notes underneath. Flavor was an equally strong mix of rich bold tastes which yielded strong smoky flavors mixed with notes of dark chocolate, molasses and more faint grain notes near the end of each sip. We noticed some light citrus notes floating around in the background as well.

This coffee was certainly living up to the Bold branding on the label so far but it was more in the medium range and not as strong as a full-on French Roast or as blown-out in intensity as your average Starbucks.

Acidity was nicely balanced as you definitely got a mild pinch of sour flavor underneath each sip but it didn’t hinder the rich smoky flavors and kept things popping right along. Body yielded deep shades of crimson red much like a fine wine and paired well with the red colors on the packaging & foil lids on the T-Discs.

Mouth feel was silky smooth with some mild oily textures but they were rather light instead of overbearing and still managed to give a pleasantly substantial feel in the end result. Finish was a bit dry with more hints of smoke topped off with a slight peppery bite in the aftertaste. 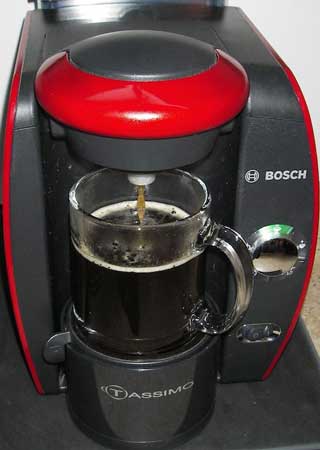 It should be noted at this point that these T-Discs are the same size as a milk creamer T-Disc and that they produce an uncommonly large 12oz cup of coffee vs. the traditional 8oz servings we’ve been accustomed to with most T-Discs in the past.

The larger serving size was an added bonus, but it resulted in an overflowing cup the first time around as we didn’t pay attention to the details on the packaging and were expecting an 8oz serving instead, so word of advice… go buy a 14oz or 16oz coffee mug right now since a 12oz mug will still result in a near overflow (as is evidenced by our photos).

We were surprised that we could still obtain a strong coffee even with a 12oz serving and have to hand it to Nabob as they managed to live up to the Bold namesake in more ways than one.

We’ve also noticed a trend with the foil lids on T-Discs lately as they appear to be getting more and more decorative with more detailed artwork lately. We liked the ghosted Nabob coffee bean crown logo in the background and thought it added to the overall visual appeal of the T-Discs. We really enjoyed the first flavor in this new line-up and look forward to seeing if the next flavor will turn out this good.

Nabob Bold Gastown Grind T-Discs work in all Tassimo brewers and are available in 12-packs for $9.49 CAD via amazon.com and at various grocery stores across Canada (pricing may vary by store).