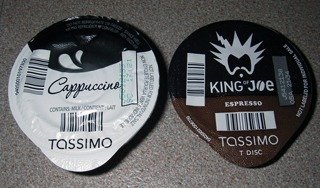 We continue our review series of T-Discs today with the King of Joe Cappuccino T-Discs.

Now, keep in mind that we’ve already reviewed the King of Joe Espresso T-Discs which are what’s being used here, so all the key points noted below are for the COMBINED aroma, acidity, flavor, etc. of BOTH the espresso and milk T-Discs, not just the espresso T-Discs.

Brewing these T-Discs resulted in smoky notes which were somewhat subdued by the milk creamer’s almost buttery aroma.

Things were a lot more toned down compared to the espresso T-Disc alone as we weren’t getting all the original notes as before. Flavor had the same smoky notes with strong oils present, but they were again less prevalent this time around due to the addition of the milk creamer. 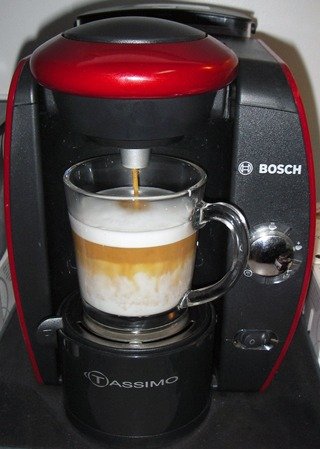 When we finally reached the thick base layer of creamer at the bottom of the cup, we discovered it was the same standard cappuccino creamer T-Discs which Tassimo have been using for years.

We always thought they were going for a buttermilk flavor and this certainly seems to be the case as we got the milky & creamy notes but also detected a prevalent buttery taste throughout.

Some people dislike this, but we didn’t mind it and have gotten rather used to it over the years.

Body was your typical beige/light brown color for the most part, but still had a nice layered effect in the final cup.

While there was definitely some crema present on top, it was a lot thinner than what’d you’d get from something like a Dolce Gusto in comparison. Still, not bad overall and LOADS better than any crema you’d get from a Keurig Vue.

Acidity was almost on the strong side but the milk creamer kept it at more of a medium level overall. It was a bit bitter at first sip but that quickly went away and mellowed out once we hit the milk notes of the creamer. Mouth feel seemed smooth & creamy throughout with a light buttery finish that had a dry aftertaste.

It’s amazing what the addition of milk can do to a coffee and while we weren’t expecting all the same strong notes of the espresso as before, we certainly weren’t expecting things to get as washed-out as they did when it came to aroma & flavor.

The aromas & flavors were so strong from the espresso alone that we were sure they’d burst through the milk creamer without any issues but that wasn’t the case. 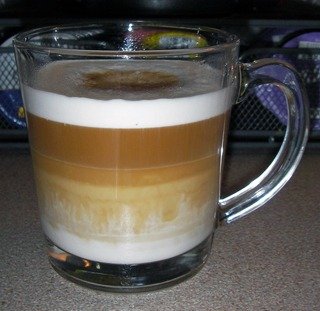 We were somewhat disappointed that the complexities in the original aroma had disappeared and that the strong smoky notes were now considerably more subdued.

If things had been a bit stronger, we would have given a higher score.

All things considered, this is still a pretty decent cappuccino flavor for the Tassimo and it’s considerably better than some we’ve tried in the past.

While we can’t exactly crown these T-Discs the king of cappuccinos, they’re still worth a try if you’re so inclined.

King of Joe Cappuccino T-Discs will work in most Tassimo brewers and are available in 8-packs (8 espresso + 8 milk creamer) for $11.99 USD at Amazon but our Tassimo pods guide shows you how to get them cheaper 😉