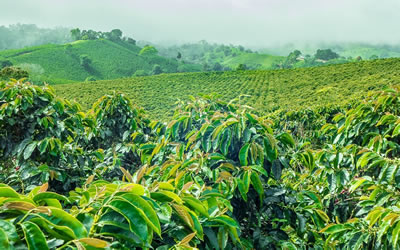 This February, I was lucky enough to go on a trip to Guatemala. This journey was the most comprehensive overview of coffee production that a coffee lover could ask for. To see the process, from the budding first leaves of a tiny coffee plant, to the harvest, milling, drying and sorting, to the final stitches being sewn on the burlap bags—was just incredible. In a matter of nine days, the group covered six out of the eight coffee growing regions of Guatemala. From Guatemala City, we set out to the Antigua region, then off to Acatenango Valley, followed by traditional Atitlán, a long bus ride to highland Huehuetenango and a quick plane ride to rainforest Cobán, and lastly over to New Oriente. (We did not visit volcanic San Marcos and Fraijanes plateau.)

We began our journey at Anacafé in Guatemala City, where we cupped samples from the different regions and got an overview of the work that Anacafé does to help farmers produce highquality coffee. Three-time Guatemalan barista champion Raul Rodas served espresso shots, and we met our guides for the journey: the amazingly gracious and patient Enrique and Amory.

The next day, we arrived in Antigua. A quick drive through the city left me wanting more. Glimpses of cobblestone streets and colonial architecture called out for photos that would never be taken, at least not by me on this day.

We continued on to Entre Volcanes Farm, where we cupped samples and saw our first nursery of coffee plants. Nestled between three spectacular volcanoes, the farm had breathtaking views. This was followed by a visit to Beneficio San Miguel, where we saw the wet-mill and dry-mill process in action.

The last stop of the day was Los Pastores, where we were met by Hans Masch and given a tour of his farm and mill. We were challenged to a coffee-picking contest against two of his pickers, which we all lost by an embarrassing margin. In 20 minutes, our group of 27 people picked just over 90 pounds of cherries. The women we went up against came out of the fields with full baskets and a staggering 110 pounds, between just the four of them!

On Wednesday we departed to the Acatenango region, where we visited La Soledad Farm, a Cup of Excellence winner for the past several years. Our hosts, the Pérez family, drove us by pickup around the farm and showed us the different varieties of coffee they are growing: pacamara, bourbon, caturra, typica and an experimental variety commissioned by Anacafé.

Next, we traveled to Atitlán with a profound sense of gratitude for our experiences. It was dark by the time we arrived, but the anticipation of awakening to the view of Lake Atitlán outside our hotel windows made us all giddy.

In the morning we marveled at the spectacular view from our hotel balconies. We departed by boat across the lake to San Juan La Laguna and visited our first cooperative farm, La Voz que Clama en el Desierto (“the voice that calls out in the desert”). We walked through the farm and witnessed the distinct differences between medium-sized single-owner farms and small producers who have banded together to strengthen their efforts.

With a new sense of appreciation for the challenges that the farmers face, such as obtaining organic certification and improving their processes, we took a stroll through town back to the boat. The streets were peaceful as we walked through town, and Lake Atitlán glimmered in the distance. Children playing in the street giggled as we passed.

The end of the week had come, and we set off to Huehuetenango to visit the ancient ruins of Zaculeu, a religious site for the Mam Maya. Complete with a ball court and temple for worship and sacrifice, the well-maintained park has been restored with concrete, compromising the original structures. The restoration, commissioned by the United Fruit Company, took place in the late 1940s.

Tired and dirty, we toured the ancient structures and then returned to the hotel for some downtime. Saturday, we visited El Injerto Farm, owned by the Aguirre family. From the moment we arrived, we knew this place was special. First, we were given a short introduction and overview of the farm’s history, focusing on the family’s insistence on the highest quality standards and showing how they motivate their workers to implement these standards. Because of these high principles, El Injerto has placed in numerous competitions over the past decade, including Cup of Excellence for the past four consecutive years.

We cupped samples and then headed out for the fields. We jumped into the bed of a large truck and held on to the support bars for dear life. The landscape of this part of Huehuetenango is indescribable. We peered over the edge of the truck, down the sloping hillsides. The views went on forever. The cloud cover was thick on this day, but the mist was welcome and added to the mystique of this place.

Upon our return to the mill, we were thrilled to find ourselves among the coffee pickers who had descended on the mill to have their coffee weighed. This magical moment of being able to observe the people who carefully select the finest cherries from the tree, and to interact with the children who played in the courtyard while their parents waited in lines 50 people deep, was an experience I will never forget.

The following day, we made our way to the small airport in Huehuetenango, where we were to depart to the Cobán region by plane. And by “plane,” I mean an eight-seater single-engine Cessna. The butterflies were fluttering in my stomach as we boarded the tiny craft and prepared for takeoff. The pilots fiddled with their instruments for a few moments, and then we were off. We had seen some amazing views of the Guatemalan landscape by this point in our journey, but the views from this vantage point were spectacular. The cameras snapped and the chatter ceased as we took it all in.

Upon our arrival in Cobán, we were whisked away by bus to the cooperative of Chicoj. The coffee tour took us through the lush rainforest of this region and it was apparent how the differences in climate affected the production of coffee for these farmers. Producers in this region struggle with mold and other diseases in the plants in a way that those in drier regions do not have to contend with, but most are acutely aware of these issues and working diligently to rectify them.

Anacafé also lends assistance to many farmers by offering testing and analysis to identify the issues and advise on the best actions to take. The biggest culprit is called ojo de gallo (“rooster’s eye”), a leaf fungus affecting higheraltitude coffee plantations. Farmers do not plant nearly as many shade trees in this region because the tree cover only exacerbates the problems. The lush rain forest and humidity in the air gave us a vivid example of one of the thousands of microclimates within the country.

On this day we also visited Finca Bella Vista, which gave us an even deeper appreciation for the challenges that producers face in this region. They cannot dry the coffee as efficiently on patios here because they receive too much rain. In the short time we were on the farm, the clouds started to move in and the workers sprang into action to protect the coffee that was spread out on the cement patio.

Due to the climate, mechanical dryers are often used as a supplement to the patios to speed up the drying process. This particular farm also used a method seen in mostly in Africa where the coffee is spread across drying beds, under the cover of a structure with plastic sheeting for the walls and ceiling.

After the tour of the mill, we departed by plane to the region of New Oriente. Now approaching our final days, the mood of the group began to turn sentimental. Upon arriving at the hotel, we gathered in the dining area for a group dinner. A short speech by Mike McKim, a member of the Roasters Guild Executive Council, left us all reminiscing about the trip and saddened that we were on the last leg of our journey.

The next day, we visited Las Nubes Farm. We were all impressed with the energy and motivation of Sr. Fabio Solís, who passed around a favorable article in a local periodical, beaming with pride and excitement. The credit was well deserved, as we would see with a tour of the tiny, but highly efficient, mill.

The mood at lunch was celebratory as we ate, drank and danced to the music of the marimba that seemed to follow us wherever we went. Feeling full and happy, we set out to Las Delicias Farm, where we scaled a treacherous mountainside to reach the coffee plants. The climate was dry and dusty, and the hike made us all appreciate the efforts of the people who climb this path every day to pick the cherries.

The owner explained that farm grows only pacamara, as it does well in the dry climate, but the farm also has orange groves to supplement the income received from the production of coffee. The vantage point from the windy trail showed us a much different landscape than the lush tropical rainforest we had departed the day before, further enhancing our understanding of the diverse landscape of Guatemala.

At last, our final day dawned and we set out on the long journey to Santa Rosa to visit our last farm, Santa Isabel. This farm was stunningly beautiful and well organized. The farm works with many organics and is certified by the Rainforest Alliance. The care they put into their work was evident as we did our final cupping of these coffees.

Lunch on this day was an event in its own right, as we gathered around decorated tables and enjoyed the carefully prepared cuisine. Farewell speeches were given and everyone had a chance to reminisce and reflect on the journey we had shared. All in all, the experience was unforgettable.

I feel privileged to learn about the many ways in which coffee is produced and to see these differences firsthand. A million thanks to Anacafé for making this trip a reality. The attention to detail and care that went into planning this journey was evident.