A shot of espresso is a great way to hit the ground running first thing in the morning. While some purists may prefer to take straight shots of espresso, its concentrated flavors are often blended into drinks like lattes and cappuccinos.

Some people prefer their coffee black but many more like to add milk or cream. This dairy addition detracts from coffee’s natural bitter taste and adds a smooth, mellow texture to the beverage, creating a more user friendly caffeine delivery system.

Why No Cream or Milk in Your Coffee?

There are many reasons why a person might need an alternative to dairy in their coffee. Maybe they are lactose intolerant, meaning that their bodies are unable to digest a milk sugar called lactose. Some folks are vegan and avoid any food created with animal products, while others may be allergic to dairy as the result of a weakened immune system. 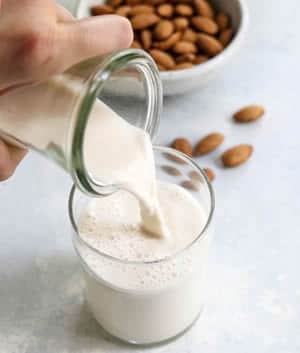 For the average cup of coffee, a flavored non dairy creamer powder might get the job done, but if you want to be more elaborate you might want to step up your game. The following dairy alternatives work well in lattes and cappuccinos, frothing nicely and adding a creamy taste. These dairy alternatives are ideal for vegans, the lactose intolerant and anyone with milk allergies.

Almond milk, the most popular plant milk in the United States, has a nutty, creamy flavor and is often considered one of the better tasting milk substitutes.

Created by grinding almonds, almond milk contains protein and unsaturated fat, which makes it a heart-healthy alternative. It also contains selenium, which helps strengthen the immune system, and its vitamin E can help combat the ageing process.

If you use almond milk in your coffee, make sure you are in the mood for a nutty flavour. 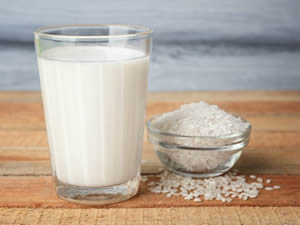 Rice milk is created by either boiling or the diffusing process and is a popular alternative to dairy products. It contains some natural sweetness and most commercial brands offer flavors like almond, chocolate or vanilla.

Rice milk lacks the calcium of regular milk and contains twice as many carbohydrates but its fat content is very low. Corporate retailers add vitamins to rice milk to make it more nutritious.

Although the thinness of rice milk disqualifies it as a substitute for regular milk in many food recipes, it is good for coffee. 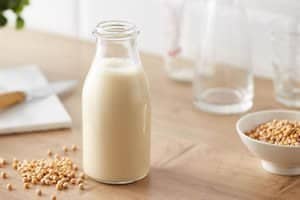 Soy milk has been a popular beverage in China for a long time and is made by soaking, grinding and boiling soybeans. Its fat content is comparable to two percent milk and its protein level is the same as dairy milk.

Soy milk comes in flavors like chocolate and vanilla. Its low cholesterol level makes it ideal for anyone with heart ailments and its higher fiber content can work as an appetite suppressant. As an added benefit, soy milk’s ability to mimic estrogen has been shown to lower the risk of prostate cancer in men.

While the pleasant flavor and rich consistency of coconut milk make it a sure bet for coffee, weight watchers might want to watch its high saturated fat content. The calorie count can be five times higher than cow milk, but it does offer iron and copper which are good for metabolism, oxygen circulation and the immune system. 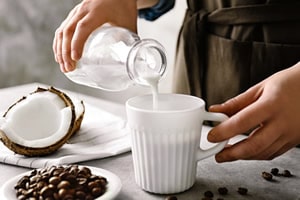 Some coffee aficionados claim that coconut milk makes the best dairy replacement when it comes to lattes and cappuccinos, probably because it froths so nicely and tastes so good.

People with milk allergies, lactose intolerance or an aversion to using animal products in general should be able to enjoy their coffee too. Thankfully there are plenty of dairy substitutes available for these people to choose from.