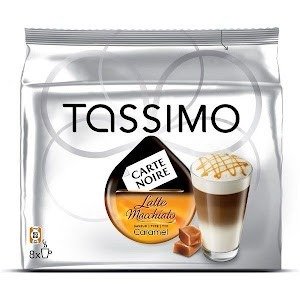 Today we decided to review a recent (well, recent on this side of the pond) new flavor from one of our favorite Tassimo brands, namely the Carte Noire Caramel Latte Macchiato T-Discs. Carte Noire has produced some superb products in the past and their espresso was always one of our favorites for quite a while.

Brewing these T-Discs unfortunately did not result in any caramel notes whatsoever which left us a bit perplexed since we were certain the word caramel was surely on the label. When the espresso T-Disc was popped in, we noted the characteristic smoky notes of the espresso along with some earthy notes in the background, but that was it. Odd… where the heck did the caramel go?

Flavor started revealing faint hints of caramel in the top espresso layers along with some smoky & oily notes from the espresso itself. It was only when we reached the base layer of milk creamer that we finally got the hit of caramel flavors. We definitely noted caramel but also noted the common buttery notes that are typically found in Tassimo milk creamer T-Discs. We didn’t mind since we found the butter flavors melded quite nicely with the sweet caramel notes. It wasn’t an overly strong caramel taste, but rather a lighter flavor instead. 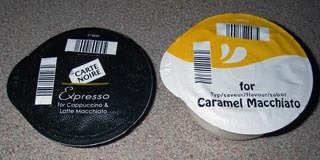 Body was very nicely layered into individual sections with darker tan brown on top, medium beige in the middle and white on the bottom all topped off with an impressively thick froth/crema layer. That’s one thing we’ve noticed consistently… the European milk creamer T-Discs always seem to produce a considerably thicker froth layer than the North American milk creamer T-Discs.

We’re not sure if it’s due to different milk being used, differences in nozzle designs on the T-Discs, etc. but man, do we EVER wish Kraft would just use the European milk creamer T-Discs for ALL their lattes & cappuccinos. 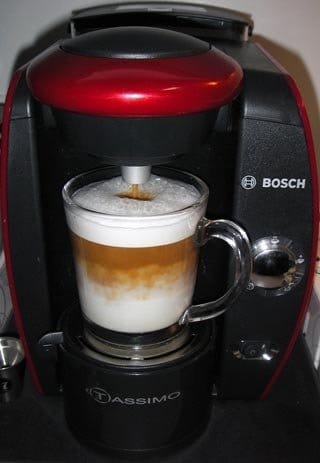 As you can probably surmise by now, yes, the creamer was flavored instead of the espresso being flavored. We think this is a MUCH better approach since 90% of the cup is composed of creamer when you brew the drink, so why not make the largest quantity the one with the flavoring?

More and more brands are taking this approach and we love it. Just compare the old Gevalia Caramel Macchiato T-Discs where the espresso is flavored to the revised newer Gevalia Caramel Macchiato T-Discs where the creamer is flavored. The difference is amazing. Instead of a weak caramel flavor, you now get LOADS of caramel flavor. Bravo to Kraft for switching to this method. Finally… something they took the time to work out.

Acidity was present but considerably toned-down by the presence of the milk creamer. This aided things by allowing the subtle caramel & butter notes from the creamer to push through the deep smoky notes of the espresso. Mouth feel was super smooth and silky with a rich creamy texture once we hit the base layer with a lingering creamy aftertaste. Overall, quite an impressive job. Carte Noire might need to work on the aroma a bit, but other than that, they certainly didn’t let us down.

We’ve tried several caramel latte macchiato T-Discs over the years and have seen some that were spectacular and other that were total rubbish. We’re glad to say that despite the aroma issues, these T-Discs are most definitely on the spectacular side of things. 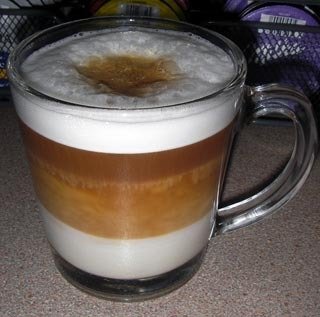 We’re madly in love with the European creamer T-Discs and sorely wish that they’d become standardized across each country in which Kraft sells their products, but unfortunately, we doubt this will ever come to pass. The difference just doesn’t compare… it’s like being brought up on average regular cuts of meat all your life and discovering an expertly trimmed, AAA prime-grade cut of Angus beef for the first time. Seriously, the North American creamer gets blown out of the water once you’ve tried the European one.

So, to sum things up, yes… this is quite a fine T-Disc which Carte Noire have done an exceptional job of producing. The espresso is strong enough where it counts while the caramel notes are light & delicate instead of strong & overbearingly sweet. Overall, just great T-Discs you should definitely try to get your hands on.

Carte Noire Caramel Latte Macchiato T-Discs will work in most Tassimo brewers and are available in 8-packs (8 espresso + 8 milk creamer) for $13.99 CAD at ECSCoffee.com. These T-Discs are not currently sold in USA.